Riesling: The taste of slate

‘Riesling is the medium to express the soil and terroir’ said Reinhard Löwenstein, from the 13th generation of Weingut Heymann-Löwenstein in Mosel (to be exact, Terrassenmosel, Terrace Mosel), Germany, during last week's tasting of eight of his Rieslings. All eight were vinified in the same way but with grapes from a number of vineyards with differing soil and slate compositions. Riesling grown on blue slate has mineral, lemony notes while that grown on red slate has a more rounded mouthfeel. Riesling on darker stone, on the other hand, displays more yellow fruit aroma, mellower acidity and less minerality. I like his philosophy of comparing wine with music: mass market wine is like CD and great wine is opera. Music lovers listening to CD for a while may like to listen to opera, just as wine lovers might trade up and appreciate the quality of hand-crafted wine eventually. My favourites were the 2009 Stolzenberg Grosses Gewachs (Grand Cru) and 2009 Uhlen Grosses Gewachs Laubach.


Most mid-priced German wines available in Hong Kong are either off dry or medium sweet and I find them all too sweet. However, the few days of tasting in Germany, organised by the German Wine Institute (Deutsches Weininstitut) together with sommeliers from around the world, was an eye opener. Not only did I taste some world class wine, I also discovered trocken Spätlese and Auslese, which are dry, fuller-bodied and more concentrated—a great match with southern Chinese cuisine which has layers of subtle flavours. Moreover, I actually appreciated some Feinherb (semi-dry) Riesling from Mosel. The residual sugar, nicely balanced by the crisp acidity, adds weight without subduing the steeliness of the wine.

Weingut Knebel is run by the young winemaker Matthias Knebel, who is enthusiastic and passionate about his wine. He believes that the vineyard is the backbone of all great wines and only uses spontaneous (wild yeast) and long fermentation, to make sure the wine is expressive of terroir. His wines are bold and concentrated with a characteristic earthiness. As with Weingut Heymann-Löwenstein, Knebel Rieslings display the characteristics of the slate: the 2009 Uhlen is mineral and steely, the 2009 Röttgen is spicy and creamy, while the 2009 Hamm Alten Reben is full of tropical fruit. The wine that left the biggest impression was the 2009 Röttgen Trockenbeerenauslese (TBA) which is laden with flavours of prune, mandarin peel, honey and coffee, with a whopping 350g/l residual sugar! We couldn’t taste the 2010 Röttgen Trockenbeerenauslese yet because it is still fermenting, even after 16 months. The German Wine Institute is running a campaign ‘Generation Riesling’ to revive Germany’s wine image and promote young winemakers. No doubt Matthias will be one of its prominent faces. 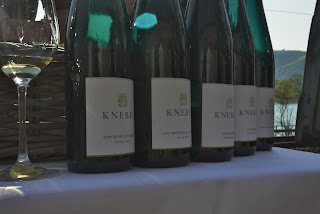 Equally impressive is Schloss Johannisberg in Rheingau with its castle on a hill. The vertical tasting of Riesling Silberlack Erstes Gewächs 2007, 2008 and 2009 demonstrated very well the importance of vintage variation on marginal vine growing regions. 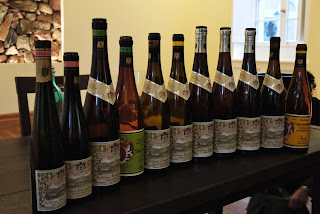 One downside of German wine, however, is the labelling. Consumers who are not familiar with them would be confused by all the Germanic terms. The quality levels are Kabinett, Spätlese and Auslese, each of which can be dry, off dry or sweet. Beerenauslese (BA) and Trockenbeerenauslese (TBA) are botrytis sweet wines, and Eiswein is ice wine. Look for the word trocken which means dry. Halbtrocken is half-dry; Grosses Gewachs (GG) is equivalent to Grand Cru and is always dry.