My marketing instinct tells me that nurturing a flagship wine is a good strategy. It provides a clear identity that differentiates the country concerned from other producing countries and allows its wine boards to create a focused campaign. But I do feel there may be room for more than one flagship per country given the spectrum of climate and terroir almost every wine producing country possesses. Bordeaux may be the best known wine in France but Burgundy must be close…and isn't Alsace Riesling equally characteristic? So, once the ball is rolling, the next phase of marketing should be to elevate other grape varieties or regions to flagship status.

Australia did a brilliant job by first associating the country with Shiraz, and later refining its image by developing a flagship for each region: Shiraz in Barossa, Semillon in Hunter Valley, Cabernet Sauvignon in Coonawarra and more recently Margaret River, sparkling wine in Tasmania.

In New Zealand, other regions are trying to get out of big brother Marlborough's shadow as well: Martinborough, the smallest region, is positioning its style of Pinot Noir, which is more concentrated than Otago’s, as its flagship, Gimblett Gravels is promoting its Bordeaux blend. Peter Saunders from Bishops Head in Waipara, reckons Riesling is that region's flagship. 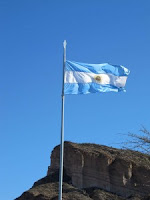 Pinotage may not be everyone’s preferred choice but it stands for South Africa nevertheless. Consumers with basic wine knowledge are aware that Pinotage is from South Africa. This helps establish South Africa as a serious wine producing country.

Wines of Argentina, with its new image, logo, and a mission to build Argentina as one of the leading non-traditional wine exporters, rightly chose Malbec as its flagship red. But I hope equal resources will be put into marketing Torrontés as a flagship white at a later stage.

Most people would think Carménère is the flagship grape of Chile. At a recent discussion with Eduardo Chadwick, the sixth generation of Viña Errazuriz and President of Viña Seña, he said Carménère may be a typical grape of Chile, it is not reliable in the sense that it is difficult to ripen. Only quality conscious winemakers are able to produce world-class Carménère. Therefore, instead of focusing on a flagship grape, Chile should emphasise on the quality and diversity of its wines - Syrah, Cabernet Saugvignon, Chardonnay and Sauvignon Blanc. Well, I suppose one can’t force a flagship grape for the sake of it.

I believe a flagship wine is like a royal family—it represents the country and commands the attention and imagination of consumers. But one must visit and explore that country in order to truly appreciate its culture and diversity. Likewise, there should be times when a flagship wine is allowed to step aside a bit and let the others shine.