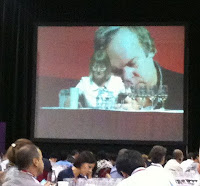 I was really fortunate to have attended Jancis Robinson MW’s ‘Beyond Bordeaux’ and Robert Parker’s ‘The Magical 20’ tastings at Winefuture, and, on each occasion, to have sat next to other eminent experts, Michel Bettane and Dr Tony Jordan respectively. After listening to all four, and later talking to yet more experts, all passionate in their views and yet sometimes holding completely opposing opinion, I began to wonder how they can all be right.

While there were universal opinions about quality—the Brazilian sparkling wine had too much alcohol, the 1990 Burgundy was past its peak, the Turkish Öküzgözü was a well-made, balanced wine and the Ridge Monte Bello 1995 was just perfect—there were widely differing preferences when it comes to style. Most New World experts seemed to like the Lynch-Bages because of its ripe fruit aromas but Michel (very much Old World) reckoned it lacked elegance and the fruit was 'cooked'. Some favoured Le Gay because of its structure; others dismissed it as too herbaceous. Some said the Antinori Tignanello had brettanomyces written all over it, while others considered it complex.

For me, the tastings and discussions were inspiring and confusing in equal measure. I am still on learning curve but after pondering it for a while I was able to distil a conclusion. What I learned is that it's a two step process: quality then style. The quality of a wine is the most important thing—all the experts had more or less the same views on this. The Old World school also focuses intently on integration, especially with oak. Once we know how to tell the difference between a good and a poor quality wine, then we can start to explore the different styles of wine and see what we personally like, be it Old World or New. As I said in a previous article, each of us has his own style preferences, and we should not allow others to dictate what we should drink or like. After all, it is our palate.
Posted by Tersina Shieh at 14:57