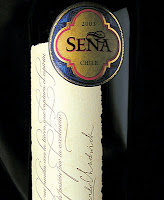 This time it was Viña Seña from Chile against Bordeaux first growth, led by Eduardo Chadwick, president of Viña Seña, and Jeannie Cho Lee MW. The main purpose was actually a vertical tasting of six Viña Seña from 1995 to 2008, but Jeannie decided to put in a few Bordeaux first growths to make the tasting more fun. The results, based on the votes of some 40 wine professionals and journalists invited to the tasting, saw Seña snatching the top five places out of ten, beating all the first growths. This demonstrated yet again how much Chilean wine has evolved and, perhaps more interestingly, how much wine professionals’ palates have changed.

Some critics argue that blind tastings like this are a waste of time because tasters ignore the track record, breeding and ageing potential of the wine. Therefore, New World wine almost always tastes better than Bordeaux because of its fruit concentration and higher alcohol. Also the line up is a giveaway: tasted between two big fruity wines, the more elegant Margaux in the middle seems thin and dilute.

While all of the above may be right, one shouldn’t dismiss all these tastings as pointless. In this Seña tasting, most of us (I was one of the tasters) knew which was Seña and which was Bordeaux, so if all we cared about was the name rather than the quality, we could easily have tweaked our scores to favour Bordeaux. But I presume most didn’t, hence the results. The exercise suggests that these tasters, most of whom were from the trade and the F&B industry, are open minded. This is important as these people are the gatekeepers—consumers rely on their recommendations when choosing wines, so hopefully they won’t be only promoting Bordeaux wine after this tasting. I am not saying Bordeaux is not good, but there are just so many wonderful and different styles outside Bordeaux that it seems a pity to pass them by. After all, we don’t want to eat abalone or wagyu beef every day!

To be honest, all the wines were of very good quality and our rankings were really down to personal preference. The one I really liked was the 1995 Seña. It has aged gracefully with such a complex bouquet and long length that most of us thought it was Old World, and it certainly fared better than the Mouton Rothschild of the same vintage. This busted another myth that New World wine can’t age.

Eduardo was surprised but definitely very pleased with the result. Hong Kong was the first stop on his Asian tour, and he was to repeat the tasting in Taipei and Seoul. No doubt he will take the tour to other major cities in the near future, just like his famous Judgement of Berlin back in 2004. It will be interesting to see how the results compare with Hong Kong's.