Making the most of ... everything 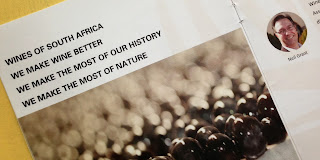 I always say that learning about wine is never-ending—the more I learn, the less I seem to know because I keep discovering new things in the process. This has just been proved right yet again. I thought I knew quite a bit about South African wine, but I learnt something new at the recent South African masterclass led by Neil Grant, the Founder and Chairman of the South African Sommelier Association. I even received a certificate after the tasting!

I may know the history and the wine regions in South Africa, and I may also know all the wines presented. But it’s always nice to listen to someone with a fresh opinion, especially an expert like Neil. We discussed the future of South African wine and its styles, and this is what Neil had to say:

Although South Africa has some 350 years of winemaking history, the modern wine industry only began in 1994 after apartheid when winemakers sought to catch up with the rest of the world in terms of viticultural practices, new techniques and investment. South African wine has a unique position between Old and New World—Old World style but with the ripe fruit of the New World. South Africa has more sunshine than most Old World wine regions so the fruit will always be riper but the wine always tend to be earthier and drier, more akin to the Old World style rather than the overtly ripe fruit character of the New World. South African winemakers want to learn from others, but they don’t want to copy them.

Take Sauvignon Blanc for example. Neil reckons South African Sauvignon Blanc tends more towards citrus and lime characters rather than the tropical fruit and guava fingerprint of New Zealand’s. It is closer to Sancerre but without the prominent grassy aroma.

Pinotage is an example of good learning. It is a South African grape but nevertheless there are small plantings in Australia, New Zealand and the US. South African winemakers learnt from the Kiwis to plant Pinotage in cooler areas and to pick the grapes earlier. The result is a more elegant style with more traces of Pinot Noir, one of the parents of Pinotage. We tasted the pleasant Warwick Estate ‘Old Bush Vines’ Pinotage 2010 but Neil reckoned the 2011 vintage is an even better illustration of the lighter style.

Some consumers associate South African wine with a burnt rubber smell. The University of Stellenbosch did some research on this a few years ago but there were no conclusive findings as to what might be the cause—the varieties, disease, winemaking or hygiene. I also had a discussion with a few South African winemakers some time ago and each had a different opinion. Neil thinks we should take ‘burnt rubber’ as a positive term; it may well be the South African terroir. I fully agree with this. For some reason we have put a negative mark on ‘burnt rubber’ even though some people actually like it. In fact, guests at the tasting agreed that the ‘burnt rubber’ is less obvious now in today’s wines, and even when they do have it it is more pleasant than before. I think it is time for us to throw this negative stigma away.

The South African wine industry has tried hard in the last 20 years to improve and today all that effort is showing great results. I think WOSA’s latest message sums it up well:

Keep it up, South African fellas!

Wine we tasted at the Masterclass: