The Drops of God 神之水滴 - Respect for tradition and nature 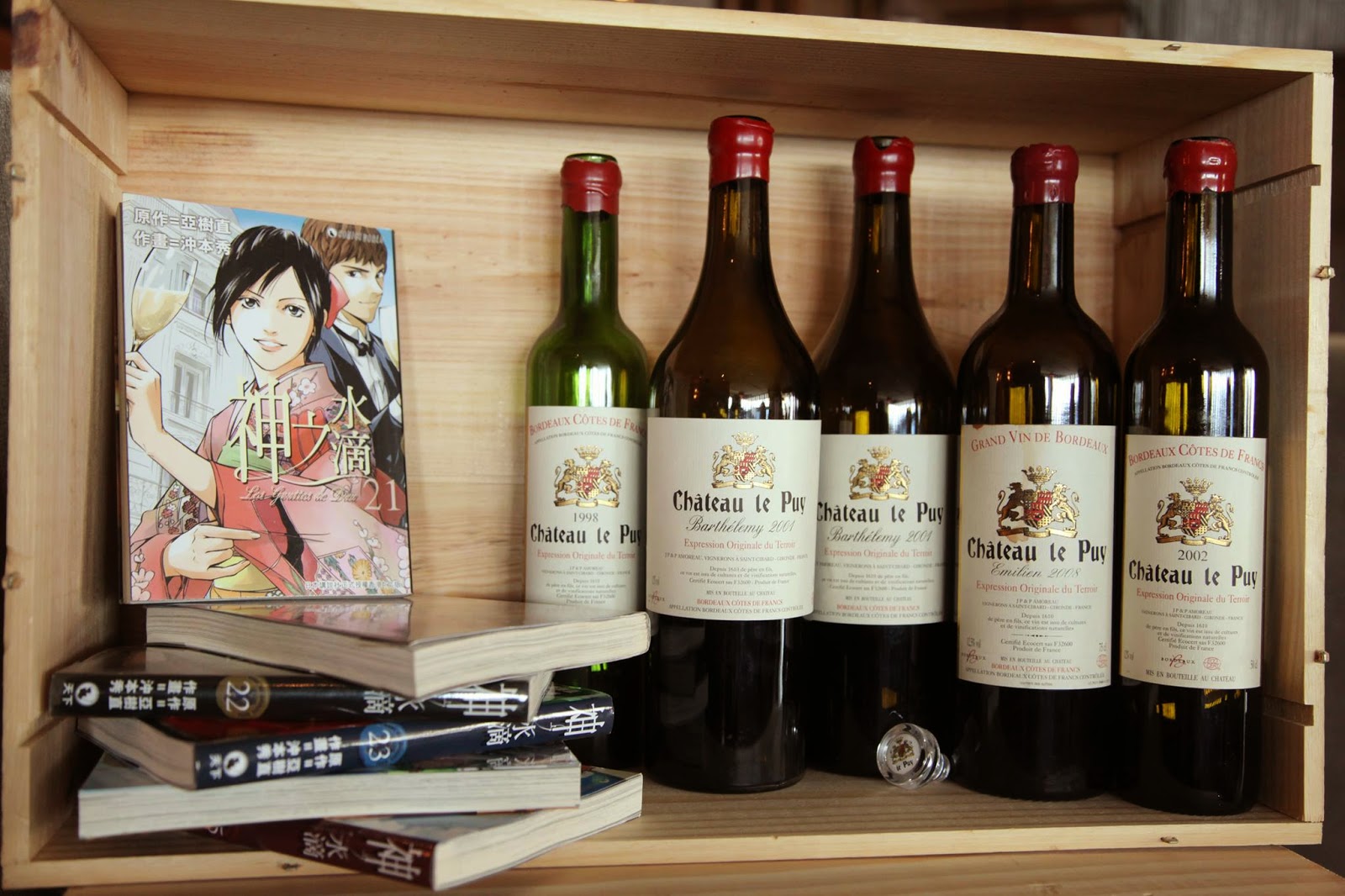 I used to follow the Japanese wine comic ‘The Drops of God’ but gave up after the fourth wine because I was sure it would be a never-ending series. So I was very curious when I was invited to the Chateau Le Puy (Saint Cibard, between St Emilion and Pomerol, Bordeaux) tasting recently, this being the last of the '12 apostles' (and finally the end of the story).

The tasting was led by Sophie Luu, the Brand Manager of Chateau Le Puy based in Shenzhen, and Esther Lee from Amber Wines, its Hong Kong importer. Sophie was very enthusiastic and kept emphasising that the vineyard was biodynamic and that no chemicals had been used on the land for over 400 years—this is amazing as most organic and biodynamic vineyards nowadays are converted from conventional farming. 400 years without the use of chemicals is indeed very rare. Jean-Pierre Amoreau, the owner, listens to the land, observes the environment, studies the ecosystem and relates to animal life. He believes that great wine can only be produced by listening to the energy around the vineyards.

The verdict? Emilien (we tasted 2007, 2008 and 2009) is understated and elegant, a more classic style of Bordeaux and a breath of fresh air compared to the sometimes over-fruity and over-oaked modern styles. I liked the 2008 for its structure, balance and mix of dried and red fruit aromas. The 2009 was quite closed while the 2007 was surprisingly good given the difficult weather conditions that year (spring frost and a rainy summer).

The Barthélemy, with no sulphites added at any stage of winemaking, and the first bottle of 2008 we opened being oxidised, generated a lively discussion on the philosophy of winemaking. As a winemaker, I understand that great wine is made in the vineyard and I support organic and biodynamic farming. However, I also understand that winemakers can be making vinegar, not wine, if they are not careful. People shun sulphites because they are chemicals and allegedly give headaches. These arguments are ill-informed because there is literally no sulphite-free wine in the world: sulphites are by-products of fermentation and all wine contains a certain amount. Besides, there are regulations governing the total amount of sulphites permitted in wine (160ppm in red, 210ppm in white and 2/3 of these amounts in organic wine), which is much less than the amounts permitted in other food products (500ppm in dried nuts and 2,000ppm in dried prunes and apricots). Sulphites' anti-microbial and antioxidant capability are essential to protect the wine from premature oxidation and spoilage. That first bottle of Barthélemy 2008 was the typical example where, through no fault of the winemaker, the wine has spoiled because of a duff cork, improper storage conditions ... who knows! 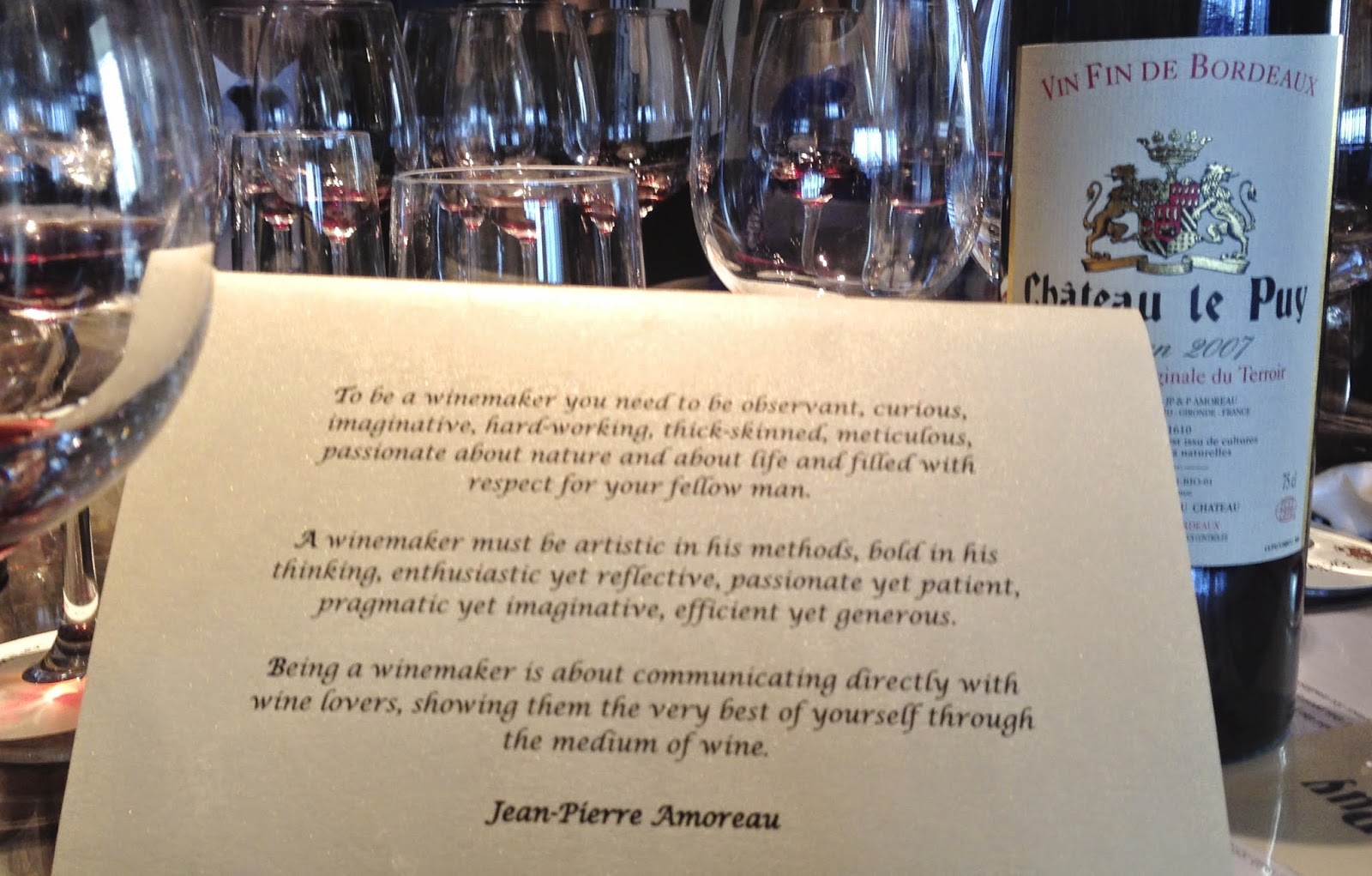 Sophie’s argument was that sulphites mask the terroir. Well, not unless a bucket load is used and the fruits are diseased. I respect the philosophy and decision of the winemakers not to add them, but the flip side is that they have to be ready to face the possible consequence that a consumer who tried that bottle of Barthélemy 2008 might dismiss the wine altogether and never buy it again. More importantly, consumers who purchase sulphite-free wine should be prepared to accept that the wine may not deliver every time, and they should be willing to give them another try.

So, does Chateau Le Puy deserve to be the last apostle? I think so. It is about respect for tradition, coexistence with nature and preservation of the environment. We human beings have been too selfish for too long and it is time for us to embrace biodiversity and sustainability.

Chateau Le Puy is available from Amber Wines. Don’t be afraid to try a second bottle of Barthélemy if you don’t like the first one.
Posted by Tersina Shieh at 09:37