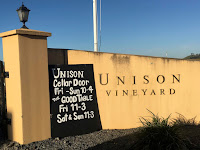 Unison
The last time I was in Gimblett Gravels was three years ago in 2015 when I did a harvest at Unison Vineyard. I was only there for three weeks and left after all the grapes were picked. Therefore it was fitting that I went back to Unison during my extended winemaking journey but this time for post harvest work. I arrived two days after the last Cabernet Sauvignon was picked.

There is still plenty to do after grapes are picked, especially for red wine. My work included punching down, pressing, lots of racking, barrel work and blending trials. It was less frantic but still heaps to learn - how long should post fermentation maceration last and when to press; what to look for at blending, effective barrel stirring .... all under the guidance of highly-regarded consultant winemaker Jenny Dobson and owner Philip Horn. 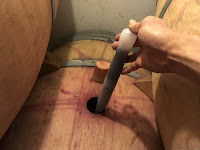 Unison is a boutique winery with just over 40 tons of grapes processed this vintage. Working in a small cellar is totally different from working in a bigger one. It is more relaxed because everything is in a much smaller scale but it also means we have no one to pass the jobs to. More importantly, we need to be much more careful not to make any mistakes that may lead to unnecessary wastage or worst, ruin a batch of wine. After all, a litre of wine means a lot more to a small winery than a big one. We even put leftover samples back in tanks/barrels rather than chucking them down to the drain. I learnt to appreciate and save every single drop of wine.

Gimblett Gravels is a sub-region of Hawkes Bay that lies on the east coast of North Island of New Zealand. As the name implies, the soil is composed on a mixture of stones, gravels and sand. Unlike most vine-growing region, Gimblett Gravels (and in fact most Hawkes Bay) is largely flat but this free-draining gravelly soil enables the region to produce world-class wine. About 90% of vines are red varieties with Merlot leading the pack, followed by Syrah, Cabernet Sauvignon and other Bordeaux varieties. Merlot dominated Bordeaux blend is the jewel of the region but I think their Syrah, with the elegant cool climate pepper character combined with ripe dark fruits aromas, is the star. Depending on producers, Gimblett Gravels Syrah can be fruit-forward and accessible when young or refined, savoury with ageing potential. 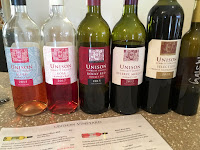 Unison’s Syrah is of the latter style. Its current release is 2013 vintage. Philip kindly organised a vertical tasting of his Syrah from 2013 to the just bottled 2016 for me and it was fascinating. The oak regime was slightly different in each year but the wine certainly reflected the climatic condition of the year. 2014 and 2016 were warmer and both wines have good concentration while 2015, being a cooler year, resulted in a  more fragrant and slightly softer wine. I love the 2015 probably because I was there picking and processing the grapes!

Unison also makes a small amount of white wine from sourced grapes. This year there are six barrels of Chardonnay which I fervently stirred every other day, and a small tank of Pinot Gris. Because of different fermentation techniques, the wines have totally different but equally lovely texture. I found that Unison wine tends to be more restrained in general probably because Jenny has lived and made wine in Bordeaux for some 20 years.

Perhaps because Hawkes Bay is not as well-known as Marlborough or Central Otago, winemakers are not pressured to only focus on one style of wine or one grape variety. I visited a few wineries and happy to see creative ideas abound. The most impressed was boutique winery de la terre with only 5.3 ha of vineyards consisted of Viognier, Chardonnay, Shiraz, Montepulciano, Barbera, Tannat with the latest addition being Tempranillo. Owner Tony Prichard spent 30 years making wine for big brand Montana that was eventually bought by Pernod Ricard. He said being a ‘corporate’ winemaker is like being in a trap with golden handcuffs that drains creativity. In late 2000, he made the decision to get away from industrial winemaking, built his own winery with local earth (hence the name de la terre), and since then made wine the way he wants. He said Viognier has a bad reputation of being fat and clumsy therefore he decided to make an elegant, textural Viognier that is not varietal driven. He loves being experimental hence all these non-mainstream varieties and stays away from Merlot and Cabernet Sauvignon. His Grand Reserve Tanat is just superb! 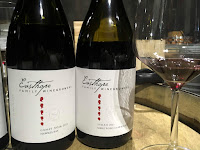 Tony was not the only ‘corporate’ winemaker who started his own label, Warren Gibson of Trinity Hills created Bilancia in 1998 and they were joined by Rod Easthope, formerly chief winemaker at Craggy Range. Rod has two lines, Rod Easthope that is available at Naked Wines in the UK and Easthope Family Winegrowers, the top hand crafted wine that Rod has 100% freedom to do what he desires. The winery for this label is perched above the Ngaruroro River next to the family house and vineyard, a playground of Rod where he does 100% whole bunch fermentation and foot treading in 500kg bins for his red wine; and ferments white wine in concrete eggs and barrels. For those who dismiss Gamay as candied fruit drink in the form of Beaujolais Nouvelle, you have to try Rod’s Gamay Noir. It is elegant with profile not dissimilar to Pinot Noir. Apparently there are only around 6 ha of Gamay in the whole of New Zealand, and Rod has access to nearly half of it. He made his first Chenin Blanc this year in barrel but plans to ferment it in concrete egg next year. 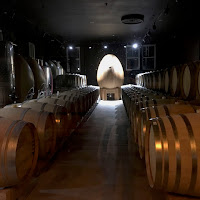 Sacred Hill co-founder winemaker Tony Bish also ventured to start not only his label, Tony Bish Wines which only makes Chardonnay fermented in different vessels, but also The Urban Winery, a wine bar-cum-Tony Bish cellar in the historic National Tobacco Company Art Deco building in Napier. Tony is a big fan of egg. He designs, produces and markets his own version of concrete egg in New Zealand, and is also the first and sole owner of the 2,000l Taransaud wooden egg in New Zealand where he makes his Skeetfield Chardonnay from 14 rows of dry-farmed vines. This wooden egg was enshrined in the cellar and I had the privilege to touch it when I was visiting. Skeetfield is definitely one of the outstanding Chardonnays from Hawkes Bay but the Golden Egg, fermented in Tony’s concrete egg, is also exceptionally. 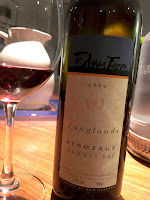 Last but not least is Jenny Dobson, former winemaker at Te Awa Winery and now consulting to a number of wineries at Hawkes Bay including Unison. She is also one of the few winemakers who made Pinotage and I was lucky to try her 2006 Pinotage three years ago and this time the 1999 vintage (Apparently there were quite a few South African in NZ wine industry in early days hence the plantings of Pinotage and Chenin Blanc). Anyway, Jenny is finally starting her own label and I was really excited about it. I stayed with her three years ago and again this time. She and her husband Charles are so knowledgeable that I more than double my learning during my stay in New Zealand. Jenny’s first wine is Fiano and the label has an erupting volcano in the background to emphasise the origin of Fiano. We had a couple of bottles and my conclusion was 4Fs: Fiano-Fruity-Flinty-Finesse. Jenny also has a red wine in barrel but has yet to decide on the final blend. 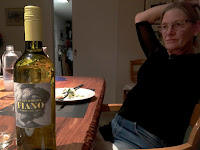 Because Hawkes Bay is not dominated by one grape variety, winemakers are flexible to play with less common ingredients. Jenny, Rod the two Tonys and Warren, talented and experienced, are handcrafting wines from different varieties in small quantities under their own labels; and this is exactly what makes Hawkes Bay interesting. I hope they can join force, perhaps something like The Douro Boys, to shout out to wine consumers that New Zealand is not as homogenous as we think and certainly there is a lot more tjhan Sauvignon Blanc.

Philip from Unison complained that because there is no direct international flight to Napier, the region is often overlooked. View Hawkes Bay as a hidden gem and make an effort to spend a few days there during your next visit to New Zealand. You won’t be disappointed.