It was nice to see Paul Mason, winemaker at Martinborough Vineyard, in Hong Kong after I had earlier visited their winery in April. Instead of tasting different Martinborough wines, Paul conducted a vertical tasting of their five Pinots from 2003 to 2009. 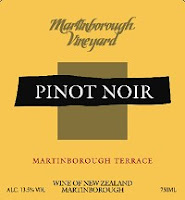 While all wines had the same footprint of firmness and savouriness, which are the characteristics of Martinborough's terroir, the 2003 and 2007 were particularly concentrated and rich. The savoury character was more pronounced, both wines displaying a mushroomy, earthy nose backed by a lingering palate. The reason was that both years had a very low crop yield: 2003 had 50% of normal crop and 2007 only 25% due to frost and bizarre weather conditions—a winemaker's nightmare but a wine lover's delight!

In contrast, 2006, 2008 and 2009 had a more benign weather pattern. The crop yields were normal at about 5 tons/ha. All three vintages display lively red fruit characters and 2009 in particular has a floral nose and an elegant structure. Paul has experimented with partial whole bunch fermentation in the past few years and perhaps the floral character was a result of it. The 2008 had 10% whole bunch fermentation while 2009 had 15%.

I like the firmness and structure of the 2003 and 2007. The 2009 is more towards the elegant end and it will be interesting to see how it ages. Available from Northeast.
Posted by Tersina Shieh at 19:32