New Kid from the Old World


I suspect many people might not even know where Georgia is, let alone have experience of tasting Georgian wine. Georgia, in the Caucasus between the Black Sea and the Caspian Sea, was part of the Soviet Union until 1991 when it gained its independence. It claims to be the oldest wine producing region in the world with an 8,000 year winemaking history that is an essential part of the country's cultural heritage. Georgian wine was traditionally made in 'kvevri', ceramic jars containing grape juice, skin and stalks that were buried underground for fermentation. The wine was thick and tannic.

Georgian wines were highly prized in Russia which imported over 90% of the production. A falling out in 2006 saw Russia putting an embargo on Georgian wine (citing counterfeiting), leaving Georgia to look for new export markets. In hindsight, the embargo can be seen as good news for wine lovers in other parts of the world.

The country has a mild climate moderated by the Black Sea to the west. Cool summer nights retain the acidity in the grapes and the mineral-rich waters from the Caucasian mountains provide natural nutrients to the vines. There are over 400 indigenous grapes, of which some 38 are used for winemaking, all unfortunately with pretty much unpronounceable names—another language for the wine lovers!

There are still a lot of small growers making wine using traditional methods while the bigger ones are adopting modern techniques, producing wines that are more accessible when young.

Georgia adopts an appellation system similar to that in Bordeaux or Burgundy where wine can be named after the region, district or village—more confusion for consumers! However, wine lovers should not be deterred by the confusing labelling or alien-sounding grapes. After all, we all learn to, more or less, master the French appellations. I have recently tried a few Georgian wines and found them surprisingly pleasant:

Tbilvino Tsinandali Special Reserve 2007 (white): A blend of Rkatsiteli and Mtsvane grapes, barrel fermented and aged in oak for nine months. Floral and ginger nose with refreshing acidity and appetising palate. At 12.5% alcohol, this is a food friendly wine that goes well with sashimi or steamed pork dumplings.


England is known for its ale and bitter, but English wine? Many will probably dismiss it or even scorn it – but not so fast: England may not be the right place for a bold alcoholic Shiraz but its terroir and climate are perfect for sparkling wine. England was part of the continent millions of years ago and the geology of the South Downs limestone ridge is in fact an extension of the Champagne region just 88 miles away. There are at least a dozen wineries in Southern England, mainly in Sussex, making some fabulous sparkling wine. 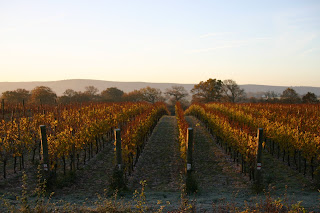 I studied for my winemaking diploma at Plumpton College, Sussex so I had a chance to witness first hand the growth of the sparkling wine industry. People thought it was a joke at first, until English sparkling wines began to beat champagnes in various blind tastings.


The temperature in Hong Kong has been soaring for months and it looks like there is at least another month to go before the mercury drops back to a more bearable 27ºC. I haven't felt like drinking any reds these last two months, even in a freezing cold restaurant; it just doesn’t feel right (like those people who eat hot pot in summer with the air-conditioning blasting on top of their heads—what a waste of energy!).

Most people, sadly, switch to auto mode and reach for a red wine when having (especially) Chinese meals regardless of the dish. But open your eyes and you will find there are actually a lot of interesting whites other than Chardonnay and Sauvignon Blanc out there that beautifully complement Chinese meals in this weather.

At a recent South African WOSA wine tasting, we had Cap Classique (sparkling), Chenin Blanc and Chardonnay with some typical dishes: siu mai (pork dumpling), marinated steamed chicken (貴妃雞) and sliced abalone. All these wines went well with the food. The bubbles of the Villera Monro Brut 2007 accentuated the fragrance of the fresh abalone, while the complexity and richness of the barrel fermented Bellingham Bernard Series Old Vine Chenin Blanc 2010 complemented the texture of the siu mai. The lightly flavoured chicken was perfect with Bouchard Finlayson Missionvale Chardonnay 2009.

Unlike New World whites, which emphasise varietal flavour and tend to be fruity, the subtlety of Old World whites often makes for a good food match. Albarino from Rias Baixas in Spain is generally a good choice with Cantonese cuisine as both the wine and food have multi-layered yet non-dominating flavours. We had a vegetarian four course meal paired with four wines at The Mira’s WHISK a few months ago and found the Pazo de Senorans Albarino 2009 a good match for three of the four dishes: watermelon and tomato cannelloni, eggplant ratatouille and gnocchi with pumpkin sauce. Only the asparagus and mushroom risotto was too rich for this wine.

Equally good matches are the full bodied Priorat white wines with heavier seafood dishes such as scallops in black bean sauce, spicy prawns and deep fried cuttlefish. I suspect the asparagus and mushroom risotto would go well too.

Just last week I tried the Tbilvino Tsinandali from Georgia, a white wine made from indigenous Rkatsiteli and Mtsvane grapes. Surprisingly flavoursome with floral and ginger nose but crisp and elegant on palate: a heavenly wine with sashimi and sushi.

Don’t waste the rest of summer. Go and get a few bottles of white and bubbly (I just bought two cases!) 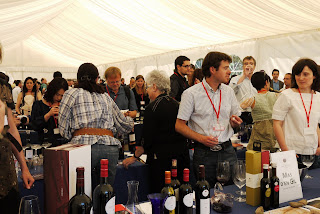 Over 90% of Priorat is big, powerful reds. However, don’t pass up on the whites if you come across them. They are mostly made from local varieties of Garnacha Blanca, Macabeo and Pedro Ximenez. Most of the vines are quite old (over 20 years), and vinification follows the traditional method of barrel fermentation and lees stirring. The best examples are complex and full bodied with spicy and smoky characters, a nice change from fruit driven New World whites and a great match with the flavoursome fried/grilled fresh seafood of the Mediterranean coast. Try Clos Mogador Nelin 2009, Marco Abella Òlbia 2008 (only 800 bottles produced), or Mas d’en Gil Coma Alta 2009.
Posted by Tersina Shieh at 09:45 0 comments