China wine from the Scottish castle


I was so happy to be able to get my winery hands dirty again, this time at Treaty Port in Yantai, China. 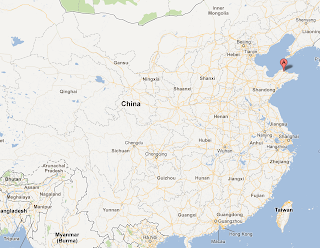 Most wineries in China need to make a statement, and this one does so in the somewhat startling form of a Scottish castle set on a hillside overlooking a reservoir about 30 minutes south of Penglai. I was picked up from the airport in a blue London cab and greeted at the castle by staff wearing Scottish kilts. All very posh, and I was not quite sure what to make of the whole thing until I met the owner Chris Ruffle and his Australian consultant winemaker Mark Davidson.

Chris is a Yorkshireman who has spent years in China making his fortune as a money manager. It is easy to assume that the Treaty Port project is a rich man's toy, but instead of boasting how great the wines are, Chris talked about the diseases in the vineyards and other challenges. 2009 was the first vintage and there was no 2010 because the crop was lost to frost. 2011's was small and this year was better although still not significant. Chris and Mark are in constant discussion about how to improve the vineyards: planting grass between rows to bind the soil, using organic matter to improve it, raising the trellising higher to minimise the threat of mildew, replacing varieties that are not suitable for the site. He is open to ideas and the goal is to produce a good quality wine that China can be proud of.

To make sure the winery is run to international standards Chris employed Shao, a young local man with no previous winemaking experience, to learn from Mark, even sending him to Hunter Valley to work in Mark’s winery for a few months. Shao, sensing the opportunity, is hardworking and willing to learn. Instead of just doing whatever he is told, he thinks and tries to understand the 'why'. Eager to pass on some of my own winemaking knowledge, I saved wine and juice samples from before and after trials for him to taste, so he could see the reasons why we stopped fermentation of the Riesling at a particular point, or added bentonite to this tank, or blended the two rosés together. He told me he would like to develop a career in winemaking. He is in the right place at the right time. I wish him all the best. China's wine industry is going to need a lot more enthusiastic youngsters like him.

Yantai may not be the perfect location for vinegrowing, the Scottish castle may be too imposing for some, and Treaty Port wine may still need a few years to establish its identity, but having lived and worked here with the staff, albeit only for a couple of weeks, I do believe there is a future for Yantai and Treaty Port. Old World wine regions have had hundreds of years of experience to match the vine varieties with the terroir. Yantai is still at the experimental stage; they will get there one day. The important thing is the willingness to learn and improve, and—I can’t emphasise enough—the passion. A wine is always more enjoyable when you know the story behind it, and Treaty Port certainly has its story. Sure, there is lots to be improved, and the weather is not ideal but it is the enthusiasm of the Yorkshireman with his equally eager Chinese team who believe China can produce good wine that will make the difference.

If you have a chance, spend a relaxing weekend at this Scottish castle. You’ll be pampered by Emma, the manager of the castle and her brilliant cooks—local ladies who were sent to Shanghai to learn western style cooking. Enjoy the countryside, full of apple and peach orchards. And if you are lucky, perhaps you may bump into Mr Rothschild at the Lafite vineyard around the corner from Treaty Port.