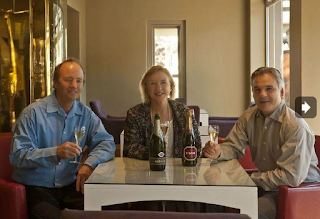 Ask any brand owner or winemaker, they will all say there needs to be a story behind the wine. So what’s the story for Villiera, a family run Stellenbosch winery headed by cousins Jeff Grier the winemaker, Simon Grier the viticulturist and Cathy Grier Brewer the export and sales director?

I was convinced that Cathy, whom I have met a few times in Hong Kong, would say it is the family heritage, but to my surprise she said environment and sustainability. South Africa has been pioneering wine production integrity since 1988, and in 2010 it introduced the Integrity and Sustainability Seal that guarantees a wine’s quality and sustainability credentials. Wines of South Africa (WOSA) expects says 85% of the country's wine brands had been accredited by 2011. So how is Villiera different from the others?

Cathy explained that Villiera has reduced its vineyard area over the years in order to return about half of the land to its original state. Moreover, Villiera runs one of the biggest solar projects in South Africa, Apart from during harvest, when additional power is required, Villiera is run solely on solar power for the rest of the year. They have replaced water-guzzling foreign gum trees, planted over 60,000 indigenous trees, conserved and recycled water, and adopted a ‘no waste’ policy. What’s more, Villiera collaborates with two neighbours, The Cape Garden Centre and Klawerlei Estate, and set aside some 220 ha of land (the vineyard area is 180ha) as a wildlife sanctuary, consisting of dams (lakes) and marshland, which is home to various South African mammals and a great diversity of birdlife.

Villiera has not used insecticides for over 12 years, yet the vineyard is not organic. Asked why, Cathy says Villiera is more concerned about the ecosystem and biodiversity as a whole. Organic production is good for human consumption but may not necessarily benefit the environment. This fits nicely with the broader concept of sustainability, which is about producing wine over the medium to long term in a responsible way that promotes biodiversity and minimises environmental damage while at the same time being economically viable for the producer. Villiera is looking into the feasibility of becoming a carbon neutral estate.

Sustainability also extends to social responsibility. Villiera has undertaken several upliftment projects for the farm’s workers and children and also helps market the produce of the M’Huidi winery, which is owned by a black family. Villiera was the first winery to gain the WIETA (Wine Industry Ethical Trade Association) accreditation for promoting fair labour practices. 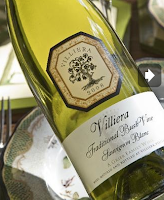 Sustainability apart, Villiera is 100% committed to quality. It experiments with various practices including altering picking times, growing different clones and using new winemaking techniques to make the perfect wine. Villiera Bush Vine Sauvignon Blanc is one such example. Realising the unique characteristics of the block of bush vines that existed when the Grier family bought the estate in 1983, Jeff decided to bottle the wine separately rather than blending it with the other Sauvignon Blancs. The wine from these low yield, 30+ year old vines is elegant, with flinty and peppery characters, quite different from a typical tropical fruit flavoured New World Sauvignon Blanc. I particularly enjoyed the 2010 vintage, which tends more towards cool climate characters, and the 2008 vintage, which at four year of age is still pleasantly refreshing.

A few weeks ago we had an informative vertical tasting of the Old Bush Sauvignon Blanc and the flagship Monro red (a Merlot dominated Bordeaux blend) under Cathy's guidance. Unfortunately, the older vintages were from the library collection and not available for sale. Other award winning wines from Villiera include the Cap Classique Monro Brut and Traditional Brut NV, and the traditional barrel fermented Chenin Blanc. Available from Northeast.
Posted by Tersina Shieh at 09:01 2 comments