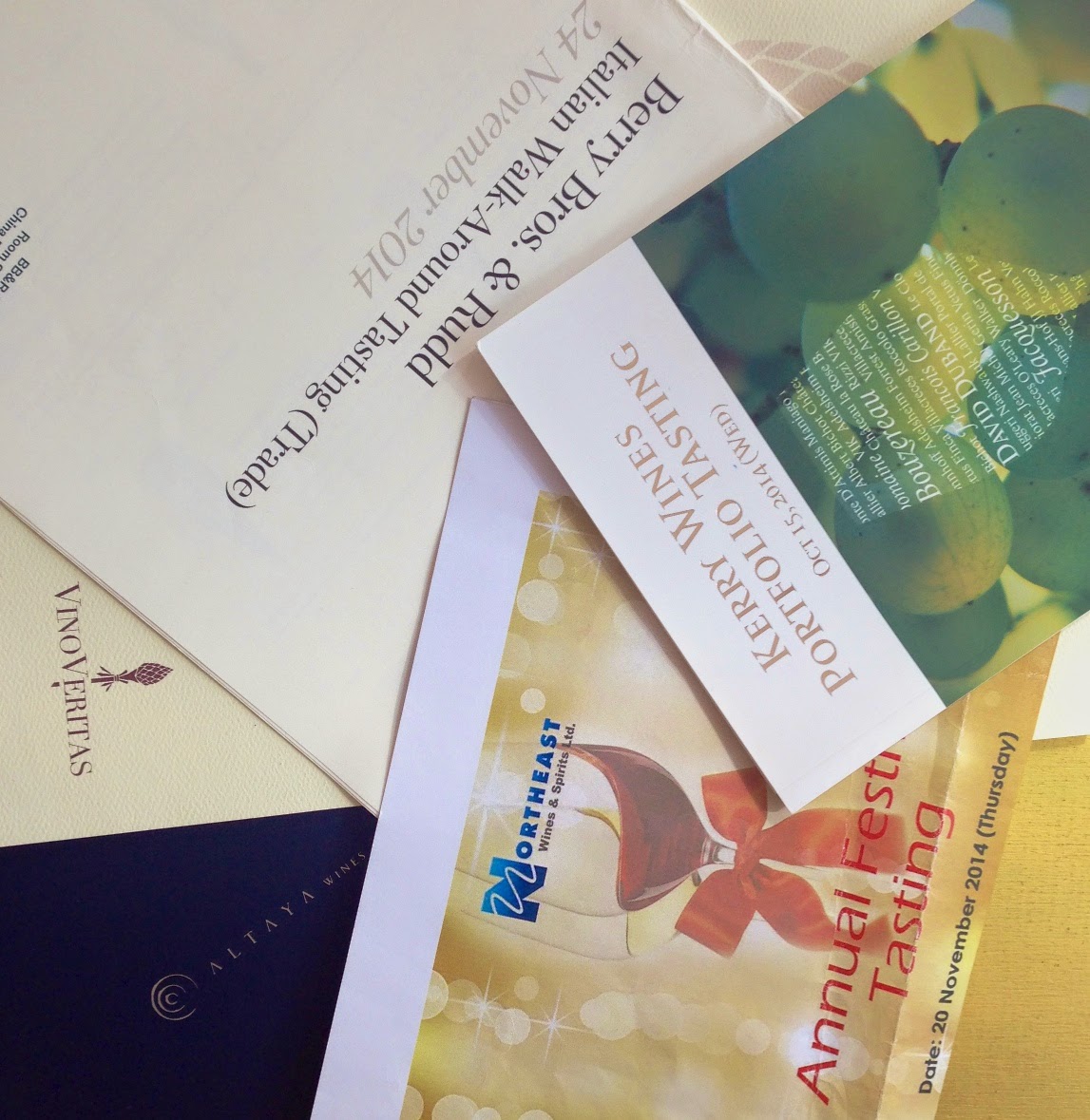 The last quarter of the year is always busy on the Hong Kong wine scene. In addition to the mega events like Wine & Dine and the Hong Kong International Wine & Spirits Fair, both in November, there are James Suckling’s Great Wines of the World and Great Wines of Italy, Wine HK and more. For a fee, wine lovers can taste hundreds of wines, among them many award-winners, some available in Hong Kong, some not, and some poured by the winemakers or owners themselves.

But amid all these high profile events it's easy to lose sight of local importers’ annual portfolio tastings. In October and November alone there were at least six such tastings: Wellspring, Kerry Wines, Armit Wines, Northeast, Altaya and BB&R's Italian portfolio. Usually the afternoon session is reserved for the media and trade while the evening is open to the public. And yes, for a small fee, wine lovers can taste a wide range of wines, some award-winning and some poured by the winemakers or owners themselves, and all the wines tasted are available, or soon to be available, in Hong Kong.

Mega wine events and high profile wine tastings are fun to go to, but portfolio tastings are often more practical for regular drinkers as they let you identify the strengths of each importer and the wines they carry, so you know where to get what wines for which occasion. And don’t think that most importers carry pretty much the same things; you’ll be surprised by the diversity of some and the specialities of others. Plus of course there are both big and boutique importers who stock very different styles and ranges. Some portfolio tastings also have winery representatives present who are happy to answer any questions related to their wines. Even when there are no wineries representatives, the whole team of importer staff is always on hand to assist. Because portfolio tastings are comparatively less crowded, you will also get more attention from the people behind the counter, a plus if you have a lot of questions. 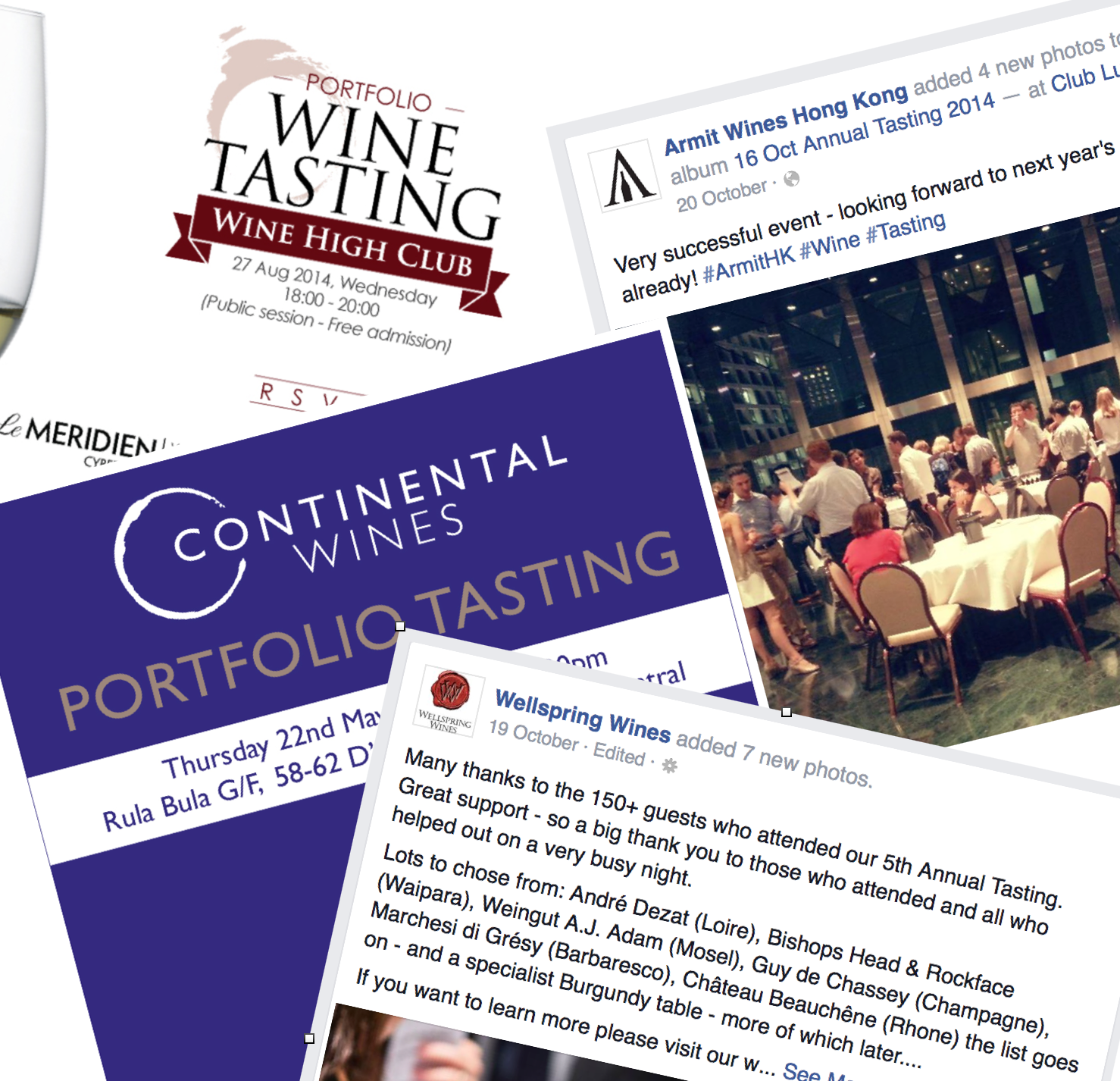 Actually, not all annual portfolio tastings happen in Q4. There are some in other months, such as VinoVeritas in March, Continental Wines in May and Wine High Club in August. I’m sure there are a lot more that I haven’t mentioned here but keep an eye on the Wine Times HK Event page, or various Facebook pages: Hong Kong Wine Lovers, Hong Kong Wine & Food and HK Wine Fans. Of course the most direct way is to get onto the mailing lists of importers.

Here are my impressions of the various annual portfolio tastings I have attended this year (Apologies if I missed anyone out):

What a great way for wine lovers to end the year: a wine fair in balmy weather under the new Ferris wheel on the Central Harbourfront.

Compared to Wine & Dine, where visitors were mainly interested in food—long queues at the food counters but not at the wine booths—Wine HK was certainly more wine focused. Yet it managed to avoid the stiffness and time constraints of some wine tasting events. Consumers wandered around the semi-outdoor venue and tasted wine at their own pace, pausing for a bite at one of the eight food booths serving round-the-globe delicacies from yakitori chicken to steak sandwiches, before tasting more wine, all the while listening to festive music—although I have to admit the music bit could have been improved.

Over 800 wines were presented by 33 companies. Some importers such as Links Concept, Jebsen, Montrose and Victoria Wines featured a range of wines covering several countries while others, including Chilled Wines, Red Mill, Schmidt Vinothek and wine ‘n’ things, focused only on one country or a couple of brands. Most visitors were clearly wine lovers and keen to know more about the wine they were tasting. There was also a VIP lounge furnished by Timothy Oulton where visitors could relax and enjoy some more exclusive wines.

Wine Times HK and Mumm, the official media and champagne partners respectively, ran a sabrage challenge where visitors learnt the trick of how to open a bottle of champagne with a blade. It attracted a crowd of eager triers, mostly ladies (somewhat surprisingly) including myself, surrounded by male-dominated onlookers. The best part of this challenge was drinking the champagne afterwards—12 bottles on Saturday! In addition, there was a Tasting Championship and Information wine sessions where visitors could do blind tastings and learn more about wine in general. Visitors could also vote for their favourite wines.

What I liked about Wine HK was the atmosphere. It was about lifestyle, fun, interaction and good quality wine without breaking the bank. That is certainly in line with my own ideas about promoting wine culture—letting consumers enjoy and learn about wine without pressure. Even Henry Tang paid a visit on Sunday. Judging by his conversation with Jeremy Oliver, Australian wine writer, Mr Tang seemed to approve of the event.

What’s more, all wines carried about a 20% discount off retail price and most were within the HK$100 to $300 bracket. Even wines in the VIP Lounge were affordable with most between HK$300 and $500 per bottle. I particular liked the concept of consolidated shopping and delivery. Instead of having to buy a minimum amount from one importer (usually about $1,200) in order to enjoy free delivery, visitors could pick as little as one wine from any given importer then pay a $90 delivery charge for a combined delivery of all their purchases. This encouraged purchases without jeopardising the sales of any importer. I bought over 30 wines from 12 importers! The organiser has yet to release the statistics but I could see there was quite a number of keen buyers.

Understandably, there were a couple of things that I felt could be improved. The VIP lounge was by invitation only, but no one, including exhibitors, seemed to know how the system worked and who might got invited. I walked straight in unchallenged on the first evening, was refused entry the second day and was invited back in on the third! Actually, I’m not sure if a VIP Lounge is really necessary as the wines featured were mostly not much more expensive than those in the main area. As an alternative, perhaps visitors could pay an extra fee at the door to gain entry so at least serious wine lovers and buyers without invitations would not miss out. The other minor point was the two storey layout. Some visitors, although a minority, thought the whole second storey was for VIPs only and were not aware there were a lot more general tasting booths up there. I myself directed quite a few consumers to go upstairs.

Anyway, despite the flaws, Wine HK is definitely a worthwhile consumer event that I hope will become a signature over time. I’m looking forward to its third running.

Note: According to the organiser's Facebook post on 23rd December, there were 3,500 customers who together bought 24,000 bottles from 89 booths, an increase of 300% from the previous year. There were delivery hiccups (I experienced it myself) but nevertheless an encouraging result.
Posted by Tersina Shieh at 15:41 0 comments