The Birth of the Wellington Wine District


If someone mentioned wine from Wellington, how many of us would associate it with South Africa rather than New Zealand?

Wellington was a ward (sub region) of Paarl until last month. On 21st September 2012, it was officially demarcated as Wellington District, on the same level as Stellenbosch and Paarl. Being a district instead of a ward also means that, if it so chooses, it could one day subdivide the district into wards although it is too early for that at this stage. 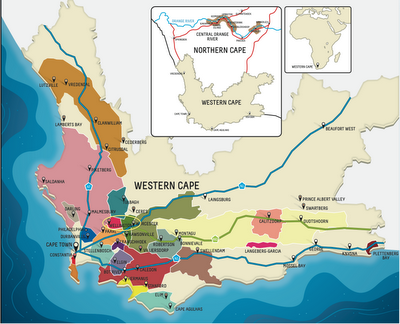 Duimpie Bayly, Chairman of the Demarcation Committee of the Wine of Origin System in South Africa, was proud to announce the birth of this new region. He explained that the distinctive terroir of Wellington differentiates this little region from Paarl and justifies demarcating such a small area.

Wellington District has only just over 20 producers. Apart from the co-ops, most are small to medium size estates. The soil is mainly decomposed granite from Groenberg (Green Mountain) which is an extinct volcano. Vineyards in the foothills of the Hawequa mountains benefit from the various mesoclimates created by the folds and valleys of the mountains. Not only does the Hawequa acts as a rain barrier, it also channels the south-easterly winds (the Cape Doctor) down the valleys. Summer may be hot but there are cool pockets where vines are sheltered from the strong afternoon sun by the mountains. Some vineyards on the slopes can be 3ºC cooler than the valley floor. I agree that this terroir is definitely different from that of Paarl. In 2010, it was proclaimed ‘Top Wine Area’ at the South African Terroir Awards.

Wellington produces more than its fair share of award-winning Pinotages, a unique South African cross between Pinot Noir and Cinsault. The rich chocolate-coffee easy drinking style, exemplified by Diemersfontein, is particularly popular among young consumers, while the more complex Cape blend with at least 30% Pinotage, such as Doolhof Minotaur 2008, appeals to more experienced drinkers.

Wine consumers have a love-hate relationship with Pinotage. Dave Hughes from The Pinotage Association admits that producers in the early days did not know how to make it, and the result was a green and bitter metallic taste (some people called it rusty nails). But with more understanding and experiment, Dave maintains that Pinotages these days are in much better shape, and consumers should not judge them from past history. Whilst I agree, I also think it’s fair to say that Pinotage is an acquired taste. It has to go with the right kind of food, like robust-flavoured Shanghai or Peking cuisines, or, as South Africans prefer, the braai (barbecue). Pinotage’s fruitiness and smoky aromas complement the sweetness of the food.

If you are a Cabernet fan, I would strongly suggest you try the Mont du Toit Le Sommet 2003, a blend of Cabernet Sauvignon, Merlot and Syrah. At nearly 10 years old, the blackcurrant fruit is well integrated with the tertiary aromas of truffles and preserved eggs.

Wellington whites are fairly full bodied because of its hot summer. I like the barrel fermented Chenin Blancs, notably Nabygelegen and Diemersfontein Carpe Diem, which are food-friendly and structured without being overly heavy. Those who prefer lighter style whites will be pleasantly surprised with the refreshing Signatures of Doolhof Sauvignon Blanc at only 12.5% alcohol. The vines are planted on a slope and only exposed to the cool morning sun. 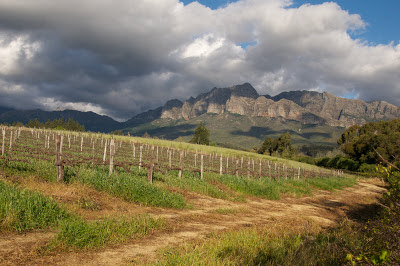 Wellington has long lived in the shadow of Paarl but with this elevation of status it can be more proactive in marketing. South African wine routes are world famous but most tourists stick with the more well known Stellenbosch and Franschhoek regions. I have to admit that Wellington town is not as vibrant as Stellenbosch and certainly lacks the sophisticated touristy atmosphere of Franschhoek. But these are compensated by its tranquil and relax feel. The surrounding scenery is just as spectacular as Stellenbosch. If you like nature, you will not be disappointed. The Wellington Wine Walk is a 40 kilometre 3-day guided walk in the winelands and surrounding fynbos (the native small bushes of South Africa) that incorporates luxury accommodation and wine tastings—not a bad ‘exercise programme’ for wine lovers. If you are very lucky, you may even be able to glimpse the endangered Cape leopard. By the way, Wellington is only one hour from Cape Town and 30 minutes from Stellenbosch so there’s no excuse not to drop by.

Wellington is also known as the cradle of vines. Not only do its 28 nurseries supply over 90% of all vine cuttings to South African producers, they also export to countries including China and Uruguay. At the celebration dinner for the official launch of the Wellington Wine District, each guest was given a young vine to signify the new beginning of Wellington, a very meaningful idea indeed.

The South African wine industry will always be dominated by Stellenbosch, its big brother (like Bordeaux to France), but I hope we wine lovers will give a chance to its little siblings. Wellington may be the latest one but I’m sure there will be more to come. South Africa prides itself as a fauna rich and biodiverse wine kingdom and only by having more demarcated regions can we truly experience the diverse wine styles offered by this Rainbow Nation.