Celebrate the summer with Joiy 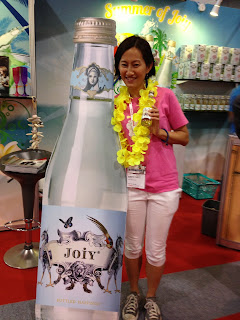 At last, an extremely user-friendly wine of decent quality that doesn’t scare off new drinkers!

Joiy is a sparkling wine made from 100% Riesling from the Waipara region in the South Island of New Zealand. Its refreshing and fruity style (think floral, citrus and honey, aromas of a Riesling!) with only 9.5% alcohol is perfect for an aperitif in summertime or alfresco dining. It reminded me of spritzer (white wine soda from Austria), vinho verde (the petillant white wine from Portugal with about 10-11% alcohol), tinto de verano  (red wine with water or soda in ice from Spain) and even Fanschop (draft beer with Fanta orange from Chile).

What is great about this wine is its packaging. It is fun, unpretentious and easy-to-understand. Inexperienced drinkers who are unfamiliar with wine labels are often confused and many simply give up and have beer or soft drinks (God forbid!) instead. In a way, we wine people have ourselves to blame as we often, rightly or wrongly, heap all the technical terms and jargon we know on these poor souls. Wine is for enjoyment; we should not put pressure on newcomers who want to share our passion.

Joly's 250ml size and screw cap makes it a very convenient drink. Winemaker Chris Archer even showed me photos of consumers drinking it with a straw. And why not? I can see this as a gateway to the world of wine. Didn't we all drink Babycham before we moved on to Champagne?

But Joiy isn't just for the entry level consumer. OK, it is not a complex wine that requires the ritual of breathing, decanting and using an appropriate glass, but its quality is definitely better than a lot of wine in the market. I would have no hesitation to grab some for a boat trip or beach outing rather than resorting to gassy beer or cloying soft drinks. Ali Nicol summed it up quite nicely in his article, ‘It’s girly; but I like it!’

Let’s let our hair down and enjoy wine in a casual and cheerful way once in a while. Wine doesn’t need to be serious all the time.

Joiy is available from The Crush. 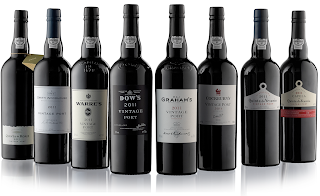 It’s official. The Port Wine Brotherhood has declared 2011 a Port Vintage year. I can’t say how fortunate I was to be one of the first in Asia to taste Symington's range of 2011 vintage ports back in mid April, even before they were bottled. I still remember the taste and the different styles now as I write this!

The Symington team was very excited about the 2011 vintage. The last time they declared a vintage was 2007, a four year gap. Unlike 2007, which was more about finesse and elegance, the 2011 vintage was a classic, old school style with opulent fruit concentration and marked minerality from the terroir, not dissimilar to the 1994 vintage, according to Euan Mackay, Symington’s Sales Director.

The prime factor that contributed to the perfect 2011 vintage was the weather. The Douro had been very harsh and dry in the past few years with minimal rainfall. The 2010 winter final saw above average rainfall that replenished the water table. Flowering, though, was difficult because of high humidity, resulting in lower yield. Summer was hot and dry and saw the grapes ripening a little too fast but heavy rain in the third week of August followed by an Indian summer delayed picking until the third week of September. The result? A small harvest—about 30% lower than average—but ripe grapes with good concentration and balanced acidity, with Touriga Franca, a late ripener, particularly shining.

Port houses only decide whether to declare a vintage after the wine has spent two winters in barrel in order to assess the quality properly. However, there are always tell tale signs of a potential vintage as early as harvest time. Jorge Nunes, winemaker at Symington, said the first sign was the unusually deep colour of the wine, a prerequisite of perfect phenolic ripeness. In fact, the entire Douro community had a feel good factor back at harvest in 2011, so it was clearly something exceptional.

Like Bordeaux, port has en primeur purchase. But unlike Bordeaux, where en primeur wines are sold in the spring following the vintage and when still ageing in barrels, en primeur vintage port is already bottled and ready to be delivered once sold. In other words, en primeur is more like an announcement of the release of a vintage rather than a cash flow management tool as it is in most Bordeaux chateaux. Once the en primeur offer is finished, the price of the vintage port will go up. This is logical since vintage port is rare. A vintage is declared only when quality is outstanding—about three times every 10 years—and vintage port averages less than 1% of total production. Graham’s only made 8,000 cases of its 2011 vintage out of a total production of 88,850 cases.

Symington is the biggest vineyard owner in the Douro and has been making port since 1882. It accounts for over a third of all premium port production. All its vintage ports come from its 100% owned and  managed vineyards, guaranteeing provenance. The five vintage ports it released this year are all of superb quality, yet each has a distinctive style:

Warre’s: Made from some of the oldest vines, yielding only 600g of grapes per vine, the wines shows a depth of fruit yet have great finesse with a lifted palate and minty nose. 3,000 cases made.

Cockburn’s: The family is particularly proud of this because 2011 was the first declared Cockburn’s vintage since the brand became fully owned and managed by Symington. Black fruits and coffee aromas, elegant and a lingering length. 3,000 cases made.

Graham’s: Violet, smoky with rich tannin and a firm structure: a classic Graham’s. 8,000 cases made.

Dow’s: Bright fruits and blackcurrant aroma with a chocolate finish. Tight and austere in structure with a long life ahead of it. 5,000 cases made.

Quinta do Vesuvio: With the highest percentage (45%) of Touriga Franca in the blend, this wine has pronounced violet and blueberry aromas with smooth tannin. 1,250 cases made.

Port fans are definitely going to love the 2011 vintage!