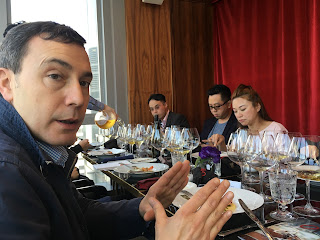 Marco Caschera, the Commercial Director of Maison Vincent Girardin, is quite a character. Probably because of his Italian origin (he was born in France but his parents are Italians), he talked non-stop during the very entertaining media lunch where he presented his still in barrel 2015 white Burgundy. He also made a few daring comments that made us laugh, probably upset some people but certainly have the ring of truth.

Marco called his white wine ‘no makeup’ Chardonnay because it is fine, elegant and precise. He admitted that in the beginning of 2000, Vincent Girardin wines were about strong extraction and new oak but had since backtracked. He said it is important that wine first has to show fruits and then terroir. New oak masks the soul of wine and they certainly do not want to make American wine in Burgundy!

Because of this philosophy, Marco compared wines from 2003, an exceptionally hot year in Burgundy, to dead babies, that the wine was good when young but ageing potential was limited, except for the very few wine with great terroir. 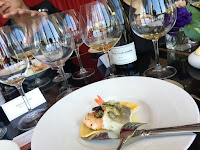 We also had a geology lesson from Marco on how hills were formed in Burgundy and soil eroded resulting in stony slopes with thin top soil and deep clay soil at the bottom of the hill. He said wines from stony parcels, like south Meursault, are more tense and elegant with pronounced minerality/saltiness, whereas wines from heavily clay soil, as in north Meursault, are round and supple. To emphasise his point, he further commented  that if a winemaker made a round and soft wine from a stony vineyard, it would be a failure in winemaking technique!

Back to his wines, 2015 was blessed with a farvourable growing season, having no disease and a cool harvest. All the six wines we tasted were certainly elegant with no makeup and terroir expressive. The outstanding ones are: 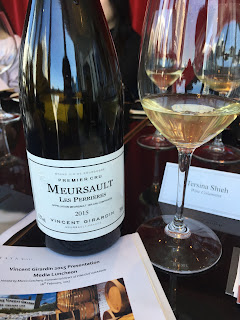 Meursault 1er Cru Les Perrières 2015: Perrières means stones and the site is considered as the Grand Cru of Merusault.

Corton Charlemagne Grand Cru 2015: Elegant and tense with minerality jumping out of the glass. According to Marco, the site has the poorest soil with only chalk hence the tight structure of the wine.

I asked Marco about what he thinks about New World wine, which is taking market share from the Old World. He was very relaxed and welcome the fact that New World wine in expanding the wine market. He said consumers drinking New World wine today will drink Burgundy one day. It is just like people drinking Bordeaux and now all drink Burgundy. Burgundy is the final destination that once wine lovers are there, they will not turn back. Well, I kind of agree but I will also certainly sneak out the back door of the Burgundian world and enjoy all the great New World wines! 😉

Vincent Girardin is available from Altaya Wines.
Posted by Tersina Shieh at 10:00 0 comments