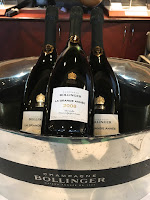 I never say no to bubbles so it was with pleasure that I attended the launch of Bollinger Le Grande Année 2008 lunch recently, and especially that 2008 is a legendary vintage for champagne.

2008 had perfect weather condition in Champagne, cool climate growing season with minimum disease risks. Temperature increased in the last few weeks before harvest resulting in fruits with fine acidity and great concentration. According to Decanter, it is a 5/5 vintage and the wines are real keepers.

La Grande Année 2008 is a blend of grapes from 18 crus (villages), with 71% Pinot Noir and the rest being Chardonnay, it is the second vintage with the highest Pinot in the blend, just a little less that the 1979 vintage with 75% Pinot Noir. True to La Grande Année’s style, the wine was fermented in small aged old barrels giving it a round and rather rich mouthfeel, which is supported by layers of aromas from floral to exotic spices and fresh acidity, thanks to its 9 years of less ageing. 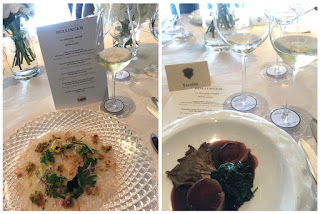 Bollinger’s Export Area Manager Bastien Mariani explained that Bollinger is all about craftsmanship and gastronomy. To illustrate this, we were treated a 4-course lunch at Clipper’s in The Peninsula paired with standard bottle and magnum La Grande Année 2008. Wine evolves slower in big bottles. The magnum is livelier while the standard bottle, still fresh but with an earthy undertone. According to Bastien, magnum complements lighter flavoured dishes while standard bottle is best served with stronger flavoured dishes. The magnum with langoustine carpaccio was excellent. The standard bottle was paired with the roasted quail, which was pleasant, but together with the sauce was a touch too powerful even for this manly James Bond champagne. 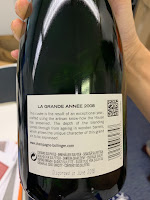 Another point that Bastien mentioned was that champagne (or sparkling wine made in traditional method) has two lives. The fist was before disgorgement when the wine develops its complexity and the second life starts after disgorgement when freshness and acidity come into play. Because of this, Bollinger now puts the disgorgement date on the back label of La Grande Année 2008. A more recent disgorged sparkling wine will be fresher than the one that has been disgorged for a while. Therefore next time you buy premium champagne for cellaring, it’s best to get those with a later disgorgement date - if it is mentioned on the label.

I haven’t tried a lot of 2008 vintage champagne but judging from Bollinger La Grande Année 2008 and various reports, 2008 is certainly worth keeping. Bollinger is available from Jebsen Fine Wines. 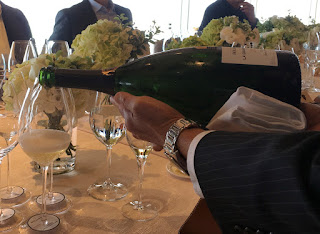