A feast of tastings

Q4 is the busiest season in the wine industry. In addition to the big scale consumer events and trade fairs, there are also more intimate trade tastings and meals. In less than four weeks, I have attended seven such tastings and there were a lot more during that period. 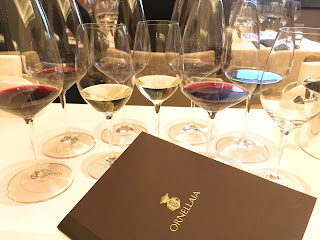 The first one was Ornellaia tasting with winemaker Axel Heinz. Ornellaia is renowned for its super Tuscan using Bordeaux varieties therefore I was surprised to have tasted two white wines. The 100% Sauvignon Blanc barrel fermented Ornellaia Bianco 2015 was particularly impressive with layers of aromas, fine texture and crisp acidity. The estate only has 5% of vineyard area for white varieties including Sauvignon Blanc, Petit Manseng, Viognier, Verdicchio and Vermentino. Axel said they are planning to plant Semillon, which he realised is the best blending partner of Sauvignon Blanc. Among the reds, Ornellaia 2007 stood out. It just started showing tertiary bouquet and had a smooth, harmonious mouthfeel. According to Axel, 2007 was not a perfect vintage but the wine has a strong personality. 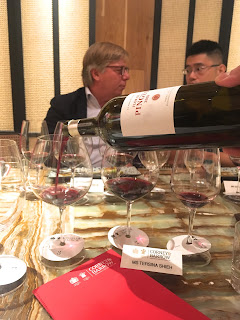 Probably you heard of Pingus, its first vintage 1995 being declared by Robert Parker as one of the greatest and most exciting wines he has ever tasted. Its winemaker Peter Sisseck was in Hong Kong to present not Pingus but his other wines from Dominio de Pingus. Flor de Pingus is made from old vines Tinta Fino (aka Tempranillo) over 35 years old. The wine may not have the cult status of Pingus (and Peter stressed that it is the other wine, not the second wine), but it is a well-made wine with complexity and structure, and certainly with a much more accessible price. The elegance of vintage 2000 was particularly impressive and paired well with the roasted suckling pig. Ribera del Duero may be less civilised than Rioja or Priorat, Peter believes it has a lot to offer especially from the old vines. Therefore, to help the region realise its potential, he started a joint project Psi with local growers to maintain old vineyard plots and improve farming techniques, and made a vibrant wine with character under the brand Bodegas y Vinedos Alnardo in 2006. Both wines are available from Corney & Barrow.

From America to Armenia 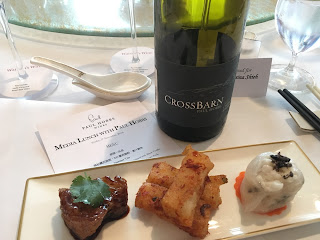 Having trained under the late Robert Mondavi and worked as head winemaker at Opus One, Paul Hobbs was convinced that producing premium wine is the way to go. Combined this with his adventurous spirits and scientific approach, Paul founded Paul Hobbs Winery in 1991 and later CrossBarn, both in California; entered international partnerships in Viña Cobos in Mendoza, Argentina; Yacoubian-Hobbs in Vayots Dzor, Armenia and Crocus in Cahors, France, and consulted various wineries around the world. At an exclusive lunch at Tang Court, we paired seven Paul’s wines from four wineries with the beautifully presented Cantonese dishes. The wines that stood out for me were Paul Hobbs Richard Dinner Vineyard Chardonnay 2015, Paul Hobbs Nathan Coombs Estate Cabernet Sauvignon 2014 and Viña Cobos Chañares Estate Malbec 2015. They were textural, poised and had lingering tastes. Asked if he would slow down after some 40 years trotting the globe, Paul answered maybe, but only after the finishes the two new projects: Hillick & Hobbs, a 100% Riesling estate in Finger Lakes, New York and a new venture in Galicia, Spain. Well, looks like he will never stop, but I look forward to tasting the Riesling. Paul Hobbs Wines are available from Watson’s Wine. 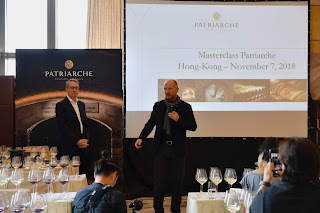 Size Matters
Wine connoisseurs and critics often focus on boutique domaines in Burgundy but the backbone of the trade is actually the big powerhouses that pump out enough decent quality wine to put Burgundy in the international wine world. Patriarche, an négociant-eleveur (merchant-producer) founded in 1780 is one such powerhouse. It has the biggest cellar - a 5km long dated between 13th and 17th century that can hold three millions bottles in Beaune, sells 60 million bottles of wine worldwide every year, is one of the biggest producers of Crémant de Bourgogne, and makes wine across all appellations from Régionales to Grands Crus. However, being big doesn’t mean compromise on quality. Export Director Vincent Goyat said Patriarche wine is about high quality for value. Its basic Bourgogne Chardonnay Cuvée des Visitandines is served on board British Airways; while the Mâcon-Lugny Les Charmes and the Mercurey 1er Cru Clos L’Evêque are pleasing with pleasant palates; Chablis 1er Cru Vaillons 2017 classic with a fresh lean mouthfeel and oyster shell note, while the 1er Cru les Rugiens-Bas 2015 is structured with depth but also an elegant floral aroma. Patriarche has always been focused on domestic market, and only started export to Asia in the past 5-7 years. Look out for their wines and see for yourself, available from wine'n'things. 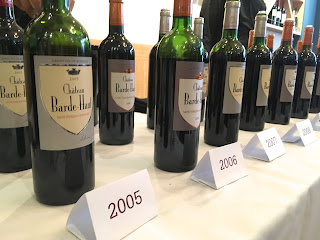 Hélène and Patrice Lévêque, owners of St-Emilion Grands Crus Chateau Barde-Haut and Poesia, Clos L’Eglise in Pomerol and Chateua d’Arce in Castillon Côtes de Bordeaux, was in town to present a vertical tasting of 10 vintages from 2005 to 2016. Patrice is the winemaker who spends most of his time in the vineyards and Hélène is the marketing lady. Hélène explained  that they didn’t inherit any estates but selected the sites with the best possible terroir. She doesn’t believe in ‘the perfect wine’ but each wine and vintage does have its own charm and identity that appeals to consumers’ emotion in different way. This is absolutely true because the audience all had different preferences. Some liked the more fruit forward 2005 vintage but Hélène and I preferred the leaner 2006 vintage. Most, however, agreed that the 2015 and 2016 have huge potential. This once again confirmed that there is no right or wrong about wine, everyone has his own preferences. In addition, we also had the chance to taste the 2016 vintage from their other estates. The St-Emilion Poesia with 30% of Cabernet Franc is elegant and is my favourite. The Lévêques’ dream is beyond Bordeaux. Hélène is excited about Bodega Poesia, their Argentinian project in Lujan de Cuyo where Malbec and Cabernet Sauvignon were planted in 1935 on its own roots at 900m altitude. The wine was not available at the tasting but I look forward to trying it. Judging by the passion of the couple, it will be as charming as their Bordeaux wines.
Posted by Tersina Shieh at 10:08 0 comments