Yunnan province maybe too warm for vine growing but it is more than compensated by the high altitude. The vineyards in Shangri-la, the Tibetan highland in the northwest of Yunnan adjacent to Sichuan and Tibet, are planted above 2,000, and up to 2,900m.

At present, there are less than ten wineries in Yunnan of which three are only making ice wine. Thanks to friend and winemaker Ian Dai, we visited four of them in the cold month of January, experiencing first hand the challenges of making wine in such a remote place.

Shangri-la Winery (香格里拉酒業) is state-owned and the biggest in Yunnan. The company was set up 20 years ago with the intention to make Barley wine (青稞酒) but came across some healthy old vines in the region. It then pioneered grape growing and is now sourcing grapes from over 800 ha of vineyards spread among 168 villages and 320 blocks. Manager Li Da (李达) showed us a few vineyard sites. The slightly lower vineyards at around 2,200m are planted with red grape varieties dominated by Cabernet Sauvignon but the company also started planting Cabernet Franc, Syrah and Merlot about 5 years ago. Chardonnay was planted at higher vineyard site between 2,800 and 2,900m. We tasted only three wines, Chardonnay, Syrah and Marsan (Reserve Cabernet Sauvignon) and they were good with fresh acidity and lively fruit characters. I was pleasantly surprised by the Cabernet Sauvignon which I half-expected might be too oak dominate but it was not the case at all. 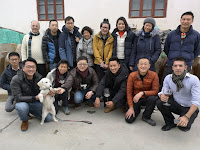 We continued down the Mekong River on a winding road to CiZhong (茨中), where winemaking was introduced by the French missionaries around 150 years ago and there are still old vines of Rose Honey (a Vitis Vinifera x Vitis Labrusca hybrid) grown within the church walls of CiZhong. Bertrand Cristau, a Frenchman based in Shanghai, had a calling to revive the missionaries’ winegrowing activity after his first visit to the region in early 2010. He eventually set up Xiaoling Estate (霄嶺) in 2013, a small outfit with only 3 ha of Cabernet Sauvignon, Merlot, Carmenere and Chardonnay scattered in four villages nearby. The winemaker for the first two vintages were a Swiss winemaker but since 2017, he engaged a Chinese winemaker Mu Chao (牟超) with experience in Burgundy and Sonoma. The barrel samples we tasted, 2018 Merlot, 2018 Cabernet Sauvignon and 2017 Cabernet/Merlot blend, were well-integrated with discreet oak and showed good potential. They only made 15,000 bottles in 2019 but Bertrand is planning to experiment with more grape varieties such as Pinot Noir and Syrah.

The next day we ventured to the village Adong (阿東) at 2,600m above-sea-level, home to the most internationally-known Yunnan wine Ao Yun (敖雲). We were greeted by the stunning snow-covered vineyard view against steep slopes and vineyard manager Rémi Vincent, who thoroughly explained the set up of Ao Yun and its terroir. Apparently, it is not common at all to have that much snow on the vineyard and we considered ourselves lucky to be treated with such an impressive view! Ao Yun was the result of a painstaking 4-year search for the perfect wine-growing site in China by the late winemaker Tony Jordan of Moët-Hennessy. The estate sources grapes from 28ha of Cabernet Sauvignon, Cabernet Franc, Syrah and Petit-Verdot between 2,200 and 2,600m altitude tended by 120 families under the strict supervision of Ao Yun viticulture team. Retailed at around HK$2,500 (USD300) per bottle, it is the most expensive wine from China and for a reason. Average yield is only 20-25hl/ha and all wine is aged in barrel (50% new and 50% one year old) for around 15 months. Since wine is less expressive at high altitude, blending is done in the lower altitude of Hong Kong. Only 20,000 bottles of wine are made. The 2018 and 2019 barrel samples we tested were from different villages and they were all dense, pretty and polished. 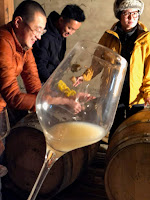 Just down the road of Ao Yun is the mini-winery of my friend Ian, who makes wine under the label Xiao Pu (小圃酿造). The Chardonnay was sourced from vineyards close by, fermented with wild yeast and skin contact then aged in old barrels. The wine is the complete opposite style of Ao Yun’s – fresh, pure and  exciting. I couldn’t help but wonder the human terroir factor. When the grapes are picked and how the wine is made certainly have a major impact of the final style. 2018 is Ian’s first vintage in Yunnan (Chardonnay and Cabernet Sauvignon) and he also makes 6 wines with grapes sourced from Ningxia.

Li Da, Bertrand, Rémi and Ian all believe Shangri-la presents a more favourable terroir for growing vines. The Meili Snow Mountain (梅里雪山) at 6,740m above sea level north of Shangri-la blocks the humid air from Indian Ocean therefore the area enjoys a dry growing season with between 300 and 600mm annual rainfall. The mountain terroir and high altitude result in high diurnal temperature difference and cool summer with average temperature around 23ºC that allows grapes to ripen slowly and retains acidity. Rémi further elaborated that comparing to Bordeaux, the vineyards receive 2 hours less sunshine because of the shade created by the mountains. However, the intense UV light at such high altitude enables riper tannin. The veraison period is also 15-25 days longer than in Bordeaux and harvest can be up to 10 weeks from the first week of September until the second week of November. Li Da said winter temperature can be -8 to -10ºC but it is not over a prolong period therefore vines do need to be buried under soil for protection.

In this respect, Shangri-la has advantages over Yantai (煙台) in the eastern coast of China where rainfall is abundant, and Ningxia (寧夏) in the west where the short growing season often results in unripe tannin especially in Cabernet Sauvignon. However, Shangri-la is not without challenges. The region is not easily accessible and electricity not reliable. The winery of Shangri-la Winery is closer to Lijiang, some 300km from the vineyards and grapes have to be trucked over 5 hours for processing at harvest. When we were there, the main road over the mountain pass and airport were closed because of bad weather, and it took us 10 hours for a 400km bus ride from Lijiang to Deqin (德欽), , the town closest to the vineyard sites! The other issue is labour as the wineries have to compete with the mushroom industry for labour during mushroom picking season in summer. On top of this is the cost, only viticultural expense including leasing of vineyard and labour is a whopping Rmb5,500/mu (over HK$90,000/ha).

Unless the infrastructure and transportation are vastly improved, wine from Shangri-la will remain niche and premium. Perhaps we just have to accept the fact that the wine indeed comes from a lost paradise.

Both Xiaoling and Ao Yun are available from Watson’s Wine.