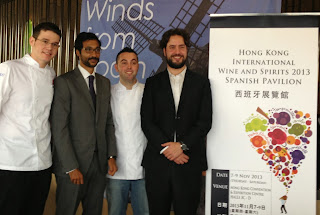 The partner country of this year’s Hong Kong International Wine & Spirit Fair (HKIWSF) was Spain. Spain has come a long way over the past few years. Although most Spanish wine is still in the entry level segment, there is more and more mid-market wine being exported to Hong Kong thanks to the continual efforts of the Spanish Trade Commission and various regional wine boards. This is reflected in the latest statistics. In the first eight months of this year (Jan-Aug 2013), the value and volume of overall wine imports to Hong Kong were down by 1% and 2% respectively because of the economic slow down (source HKTDC), but Spanish wine imports were strongly up—volume increased by 35% and, still more impressive, value was up by close to 50% (source: Spanish Trade Commission).

This is good news because Spanish wine deserves more attention. Most of us know of Spanish red wines such as Rioja, Priorat and Ribera del Duero, but there are also some very good white wines from the cooler Rias Baixas (Albariño) and Rueda (Verdejo, Viura and Sauvignon Blanc). Like Portugal and Italy, Spain has its fair share of native varieties though most are not available here. If you want to have something different, try Mencía and Juan García , both elegant and fragrant with the former quite similar to Cabernet Franc from northwest Spain. They typically used to be high yield and diluted but the new generation winemakers are making some serious wine from old bush vines.

Of course there is also the underrated sherry. Sherry lacks the obvious fruit aromas but it is very versatile and food friendly. And if you want an affordable good quality sparkler, Cava never fails to deliver.

Being this year's partner country of the HKIWSF, Spain also co-hosted a Spanish theme gala dinner on 7th November with food prepared by The Spanish Chef Association in Asia. The Association was initiated by Alex Fargas, chef de Cuisine at Fofo by el Willy, in 2012 and now has over 20 members in Asia. Its objective is to promote Spanish gastronomy, culture and products, and it aims to be the bridge between authentic Spanish cuisine and local expectations. I believe this is definitely the right direction to take—bundle food, wine and culture together. Asian, especially Chinese, spend more time eating than drinking. Alex says his restaurant is full every day, and perhaps this is one of the reasons why Spanish wine is getting popular as well. According to OpenRice, there are now over 50 Spanish bars and restaurants in Hong Kong. Seems that Hongkongers definitely have a palate for Iberico ham and paella!
Posted by Tersina Shieh at 17:39