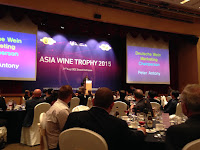 With the increasing wine consumption in Asia, there are more wine competitions being held in this part of the world with the aim to help consumers choose wine. The biggest such competition is Asia Wine Trophy, organised by Deutsche Wein Marketing (DWM) and with International Organisation for Vine and Wine (OIV) as patronage. Its third running in 2015 attracted over 3,600 entries from 29 countries, assessed by some 110 judges from all over the world. Its host city is Daejeon in the centre of South Korea, the third biggest city in Korea and where the first Korean wine was made in 1968. The Daejeon city government, keen to promote its wine-based tourism, lends its full support to this competition. 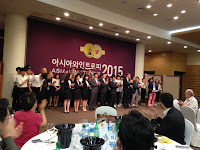 According to Peter Scheib, a steering committee member, DWM is the biggest organiser of wine competitions in the world. Its four Trophies, the biannual Berlin Wine Trophy, the annual Portugal Wine Trophy and the annual Asia Wine Trophy, have a combined 15,000 wine submissions. Judges, who come from different countries, have diversified background from wine producers and importers to educators and journalists, to ensure an unbiased evaluation. All wines are judged according to the OIV international wine competitions’ guidelines on four criteria: appearance, bouquet, taste, and overall harmony. An OIV observer is on site to document and evaluate the tasting process, who may suspend the tasting if the standards are violated. More importantly, judges’ performances are also reviewed at the end of each competition. Only those who pass the review will be invited to judge at subsequent Trophies. Peter also emphasised that only a maximum 30% of wines would be awarded medals, including Grand Gold, Gold and Silver, to maintain the Trophies’ standards and to deliver a pleasant experience to consumers who purchase the winning wines.

Judges appreciate the competition as well. Peter Angele, one of the judges and a sommelier from Germany, was delighted to learn about the preferences of his Asian counterparts, while at the same time, happy to share his knowledge and enthusiasm of Silvaner, a German variety seldom seen in Asia, with them. Lee Jung-Hoon, sommelier in Seoul, was quick to point out that Silvaner would be a good match with medium palate-weight Korean dishes. In fact, the Nordheimer Vegelein Silvaner Spätlese Feinherb 2014 with only 8.3 g/l residual sugar, courtesy from Peter, won a thumbs-up from a group of Hong Kong and China judges who paired it with fresh lobsters and crabs.

In addition to the judging that lasted for four days, there were also seminars during the period with technical presentations on topics like viticulture and climate change, tasting sessions of less common wine such as those from China and Moldavia, as well as discussion on Asian markets trends and challenges. Jurors treasure these continue learning opportunities where they can share their insights with colleagues. 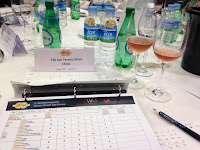 As one of the judges, one thing I learned is the commonalities and differences of various Asian wine markets. French wine may be the number one player in China, Hong Kong and Taiwan, its leading position is being threatened in Japan and Korea, and certainly not the case in Singapore and Malaysia. However, all countries show that Chilean wine is the rising star because of its quality/price ratio and it privilege of Free Trade Agreement with some countries. Although red wine still dominates in all markets, the consumption of white and sparkling are increasing with sparkling wine particularly popular in Japan and Korea. All agreed that the young generation and female consumers are the driving forces of Asian wine markets. However, the markets are still skewed to the premium end where buyers drink wine for the status and for gifting; and the lower end where wine is consumed as an alternative alcoholic beverage to beer. 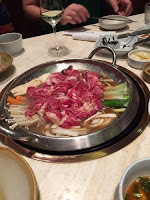 The majority of judges share the view that local food and wine pairing to introduce wine as part of lifestyle to Asian consumers is essential to develop the mid-market wine segment and to expand the consumer base. Stephen Hall, a New Zealand wine writer based in Malaysia, is an advocate and has been promoting  Malaysian/Singaporean food and wine pairing for over 20 years. Flavour Colours, a Chinese food and wine pairing i-Phone/i-Pad app based on flavour intensity, developed in Hong Kong, is another fine example of promoting wine culture in Greater China.

Judges also agree on the importance of social media platform, led by Facebook, to engage with the young consumers. Internet sales of wine, however, is allowed in some Asian markets such as Taiwan and Korea but  nevertheless, it is an important communicate channel. For example in Korea, online reservation of wine for pay later at a pick up store is a clever way to circumstance the ban.

Asia Wine Trophy and its parallel seminars demonstrated that although the Asian wine consumption is just at its beginning level (consumption per capita ranges from around 1.3  litre in China to 5 litres in Singapore), it is a long but exciting road for producers. Fellow wine judges, who are also wine ambassadors in their respective markets, should focus on how to sparkle the young consumers’ interests in wine by preaching the enjoyment of wine with local food.

Mami Whelehan, a wine and food columnist with 23 years experience in wine distribution in Japan and a panel chair in Asia Wine Trophy, concluded that medals are important in the Japan market as they serve as trustworthy guidelines
for average consumer. Park Chan-Jun, organiser of Asia Wine Trophy and a wine writer, echoed the view, and so did John Hung, Joe Sriwarin, TC Liong and Nelson Chow, presidents of Sommelier Association of Taiwan, Thailand, Singapore and Hong Kong respectively.

Next time you see an Asia Wine Trophy medal award wine, try it and see if you agree with the judges.
Posted by Tersina Shieh at 12:40

Email ThisBlogThis!Share to TwitterShare to FacebookShare to Pinterest
Labels: competition