Spätburgunder, not quite the hidden gem of Germany anymore 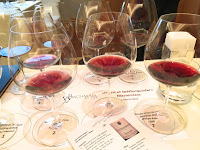 Sure Riesling is Germany’s most well known wine but Spätburgunder (aka Pinot Noir) is quietly catching up. Joel Payne, nicknamed Mr German Wine by Karl Bachmair from Bachmair Wines, guided a full house of sommeliers and media to taste nine such fine wines from five German wine regions recently. 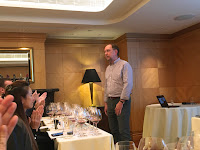 Spätburgunder is nothing new in Germany. Like most grapes in Europe, it was brought from Burgundy and planted by monks at least in the 4th century although it was only first documented in 14th century. However, because of poor ripening, the wine was a hit and miss and the majority was rosé rather than red wine. But things have changed in the past couple of decades. Climate change, clonal selection, improved viticultural practice and experience in winemaking technique all propel Spätburgunder to today’s height. 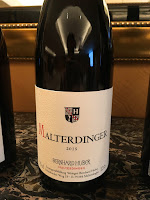 Germany offers different styles of Spätburgunder. Its climate is similar to Burgundy and there is no shortage of Burgundian style Spätburgunder. The 2015 Malterdinger from Weingut Bernhard Huber in Baden we tasted is one of them. Bernhard Huber began estate bottling in 1987 after he took control of the family’s vineyards and slowly increased planting to around 26ha. His son Julian inherited the estate after he passed away and continued Bernhard’s legacy. According to Joel, his wine is often mistaken by professionals, including respected French wine critic Michel Bettane, as Burgundy Pinot in blind tastings. Julian believes in small is beautiful and less is more. His goal is to only make Grand Cru Pinot Noir and Chardonnay. 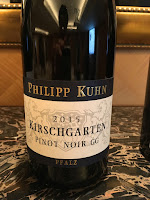 On the other end is the more international New World style Pinot Noir. Contemporary winemakers age the wine in new oak barriques (225 litres) resulting in fuller-bodied wine with more depth and structure. Philipp Kuhn 2015 Kirschgarten Grosses Gewächs is an outstanding wine of this stye.

Spätburgunder also makes its way into sekt, German’s sparkling wine. The Raumland 2010 Pinot Prestige Brut Blanc de Noir from Rheinhessen, spent a whopping 88 months on lees, is multi-dimensional with layers of fruits, hints of brioche and smokiness supported by crisp acidity. It was voted the Best German Sekt in Gault Millau Guide 2018. 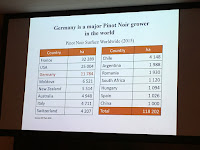 Baden and Pfalz, the two Southernmost wine regions in Germany, have the most plantings of Pinot Noir but the variety is also grown in Württemberg and Rheinhessen, as well as the warm pockets in Ahr and Nahe. Its planting area, at 11, 784 ha, ranked the third in the world after France and the USA; and is more than New Zealand and Australia combined.

So next time when you need a red wine to compliment your German Riesling, look no further. Spätburgunder is not a hidden gem anymore. You can find them at Bachmair Wines
.
Posted by Tersina Shieh at 11:01