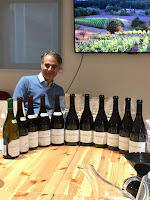 Burgundy and Oregon maybe a world apart but thanks to Jean-Nicolas Méo, owner of Domaine Méo-Camuzet in Burgundy and partner of Nicolas-Jay in Oregon, we were able to compare the Pinot Noirs from both sides of the Atlantic Ocean during his recent visit in town.

The family owned Domaine Méo-Camuzet is in Vosne-Romanée. In 1989, Jean-Nicolas joined his father after studying winemaking in Burgundy and a stint in the USA . With his father Jean Méo and well-respected Henri Jayer as his mentors, Jean-Nicolas experimented with different winemaking techniques and eventually developed his own style. He prefers de-stemming as opposed to whole bunch fermentation although he may include around 10% of stems during fermentation. Grapes are cold-soaked at around 15ºC for a few days prior to fermentation in cement or stainless-steel tanks at up to 30ºC, then warm-soak for a couple of days before pressing for more extraction. Depending on the fruit structure, each wine is aged with different wood regime. Today , the domaine produces 25 wines, including Grands Crus and Premiers Crus form the region. 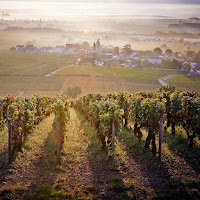 We tasted four Pinots, all 2016 vintages from different villages in Cote de Nuits. True to Burgundy distinctive terroir, the wines show different characters. I like the delicate aromas and velvety structure of Fixin, a lesser-known small appellation with only 80ha under vines. In comparison, its neighbour Marsannay, the latest, bigger and more well-known appellation, produces wine with bright red fruits. Vosne-Romanée, with multi-layered aromas and freshness, is my favourite. The two plots of vineyard, next to the family house, are located at a higher altitude. In contrast, the wine from Morey Saint-Denis is sturdy with a darker fruits profile and a firm tannin. This is why Burgundy is unique - every appellation, no matter how close they are, has its own interpretation of Pinot Noir. 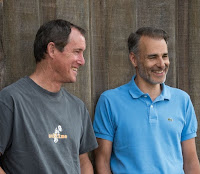 Jean-Nicolas met music producer Jay Boberg 30 years ago when he was in the US. Sharing the same philosophies about life, wine and music and especially the passion for Pinot Noir from Oregon, the pair eventually founded Nicolas-Jay in 2013. Jean-Nicolas was excited to take what he learnt from Burgundy to a new region with different climate and soil.

Unlike Burgundy, Oregon has a wet spring but dry summer. There are also differences in the soil, clones and working attitude. Burgundian is more intuitive whereas Oregonian is more technical. Jean-Nicolas was humble to admit that he also has to learn from his US colleagues. 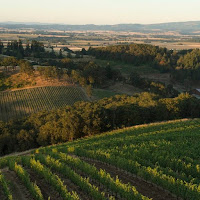 At the moment, Nicolas-Jay only produces Pinot Noir. They source grapes from three vineyards sites in Willamette Valley in Oregon, make three single-vineyard wines and two blends using grapes from across the valley. Comparing to Burgundy, the Oregon wine is riper and more fruit-forward but there are still variations in different sites. The 2017 wine from the organic, dry farmed Nysa vineyard is generous with a softer tannin while the same vintage wine from the cooler, biodynamically farmed Momtazi vineyard is more focused, uplifted and structured. The 2017 Own-Rooted Pinot Noir was made from vines at least 30 years old and planted on their own roots. The wine has a more savoury note and it will be interesting to see how it develops. Jean-Nicolas also showed us three vintages of Willamette Valley Pinot Noir, 2017, 2016 and 2015 to compare the different vintage conditions and evolvement. 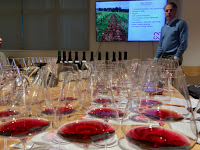 The only white wine we tried was Hautes-Côtes de Nuits ‘Clos Saint-Philibert’ 2016 from Domaine Méo-Camuzet, a very pleasant wine that Jean-Nicolas described as a cross between Chablis and Meursault. It possesses the freshness and mineral character of Chablis and at the same time, the ripe stone fruits aromas and richness of Meursault. Cotes de Nuits is a red wine region but this particular vineyard is at an altitude of 1,200ft with stony soil. Jean-Nicolas explained that Pinot Noir grown there will lack richness and volume, but the terroir is just perfect for a remarkable Chardonnay.

Running two wine estates thousands of kilometres apart and with harvests pretty much at the same time is not easy. Jean-Nicolas said he is lucky that he can rely on resident winemaker Tracy Kendall. He goes to Oregon around four times a year and definitely at harvest. Burgundy harvest is compact and shorter so he is able to catch the end of Oregon harvest, which spreads over a longer period of time.

Both Domaine Méo-Camuzet and Nicolas-Jay are available from Watson’s Wine.
Posted by Tersina Shieh at 18:50